How does lack of legal status affect migrant savings?   The case of Bingo (not my respondent's real name) may help shed some light on the issue.

Bingo overstayed in Japan for 19 years, surrendering in May 2008.  In May 15, 2001, he opened a bank account at the Metrobank Head Office in Manila but did this through the Metrobank Osaka branch.   This enabled him (through a representative) to deposit money in Yen and this would be remitted automatically in Philippine Pesos to his bank account in Manila.  He could not make withdrawals.
Bingo's deposits totaled approximately P700,000 in 7 years.  By September 2009, Bingo made the last withdrawal of P5,000 pesos, and the account was closed.

A number of questions quickly come to mind.

- How does one assess P700,000 savings in Japan in 7 years; that is, is this a small amount or a large amount to have saved up?  To answer this we will have to look at Bingo's deposits relative to his salary and, more importantly, relative to his expenses.

- How could P700,000 evaporate so quickly in just over a year after Bingo's return to Manila?  To answer this we will have to tackle the issue of whether or not migrant savings get converted into productive, sustainable income sources after their return home, or do savings just get used up for living expenses?

[Big thanks to Bingo because he kept his old bank account passbooks - two of them - and allowed me to photograph them, and to share the data with others.]

Let's begin by taking a closer look at Bingo's deposits and withdrawals from May 15, 2001 (first deposit) to September 9, 2011 (last withdrawal).  Below are eleven pages of two bank books of Bingo. 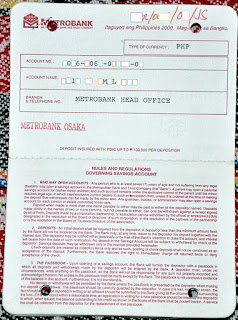 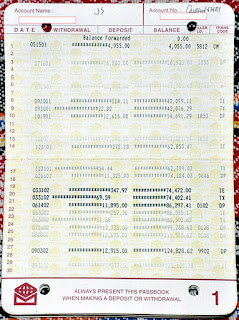 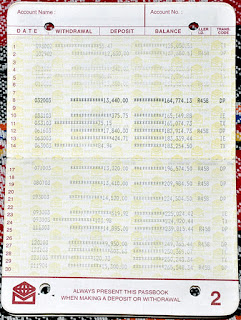 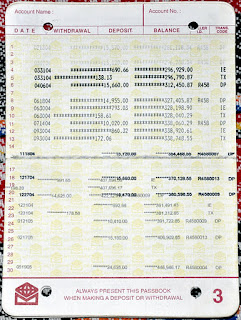 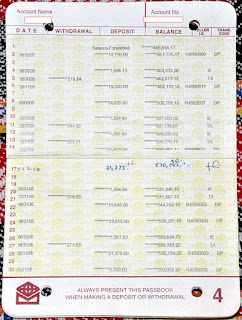 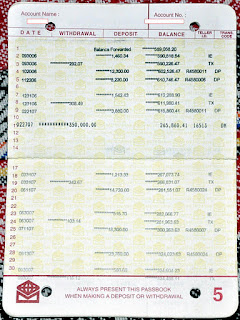 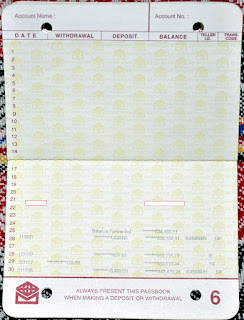 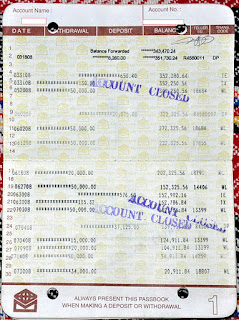 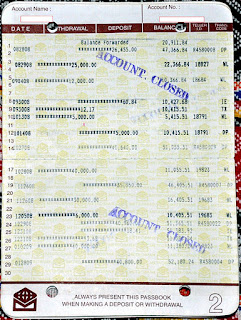 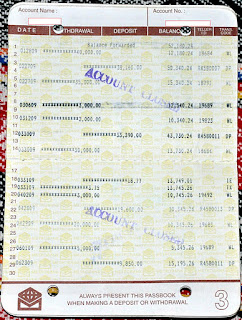 Since some amounts are not entered clearly I made a pdf file of the bank transactions for your easy reference.  I made the following observations:

- Average amount per deposit is P14,000.
Note that deposits were made in Yen and converted to Pesos.  The JPY-to-Peso exchange rate during the period 2001-2008 thus becomes relevant to assess the magnitude of the P14,000 relative to Bingo's salary level.  Converted to Yen, average deposit amount is ¥30,000 and total deposited amount in 7 years is ¥1,500,000.

- P350,000 was withdrawn from the Philippines in 2007 when Bingo was still in Japan.  Bingo explained that he had authorized this withdrawal for the purpose of starting a computer rental business to be run by his family, specifically his eldest son.  More below on how this business venture fared.

- Deposits from Japan continued even after Bingo returned to Manila.  Eleven deposits totaling roughly P350,000 were made monthly starting June 2008 up to June 2009.  More below on who these deposits were from.

Bingo differentiated between money he would remit for the living expenses of his wife and kids in the Philippines and the money he deposited in his Metrobank account as savings.

He would turn over his daily salary of ¥15,000 to Cathy(not her real name), his live-in partner, who would then give him back ¥5,000 for his daily expenses.  Adding her own salary to their combined finances, Cathy would then take charge of paying all their monthly bills and food expenses and any money left would then be split between remittances to both their families and to savings deposits.

As Cathy had legal status, she would be in charge of transacting with the bank, depositing Bingo's savings into his account, and their remittances for their families into her account.  Cathy's niece in Manila would then send word to Bingo's family that a remittance had arrived.  Bingo's mother would go to Cathy's niece's house and together they would go to the bank and withdraw the remittance from Cathy's account. [The arrangements on how remittances were spent or how they eventually reached Bingo's wife and children from Bingo's mother is the subject of another posting].

Bingo declared that he had been remitting not less than P20,000 per month without fail for the living expenses of his family (though finding the necessary paper trail -- i.e. bankbooks -- will be harder as it will entail interviewing Cathy and Bingo's mother).

Bingo's employment history in his 19 years as an overstayer in Japan is as follows:

Note that I compute savings rate based on gross income, that is, not deducting living expenses and remittances.  I use this method mainly because I have yet to develop a method to standardize the various variables involved in computing net savings such as, aside from living expenses and remittances, entertainment expenses (gambling, movies, travelling), expenses for vices (smoking, etc). Aside from standardizing the measurement of the Bilog's various expenses, there is the issue of validating and finding documentary bases of amounts mentioned by my respondents.

Another important issue to note here is that I use an employment rate of 100% since Bingo himself stated that during the period 2001 to 2008 he had been fully employed in only one construction company.  If we conservatively assume that he was employed only 50% of the time during that 85-month savings period then his savings rate becomes 12%.

How is a savings rate evaluated?

A number of approaches are possible, varying by the perspective of the beneficiary of the savings.  Remember that we differentiate savings (cash for future use) from remittances (for current use such as for living expenses).

The first beneficiary is the Bilog's dependents (including himself).