Income is realized as a confluence of social variables is consummated, if you will, by reflexive choices.  In what specific ways does “bilogness” insert itself into income generation?

Bingo and Subaru attest to a feverish employees’ market during their early years in Japan (late 80s and early 90s).  Recruiters, they narrated, would begin offering work the moment they stepped out of trains, the quoted salary starting at ¥13,000/day eventually increasing to ¥18,000/day as you approached the station exit.  Yet the impact of this contextual variable (recall the contextual theme discussed above) on bilog work choices and duration seemed to be secondary to one’s social network.

While Bingo and Subaru both tried multiple blue-collar jobs at different periods, only one or two of those were their major jobs which they kept for years on end.  Boy’s case is notable in that he stayed in one job for his entire nine years in Japan.  Yumi would have persevered as an entertainer for her entire tenure had she not changed residence status midstream into Child of Japanese, also thru bogus documentation.  Taken together average yearly salary baseline is ¥1.8million (see Textbox 6). 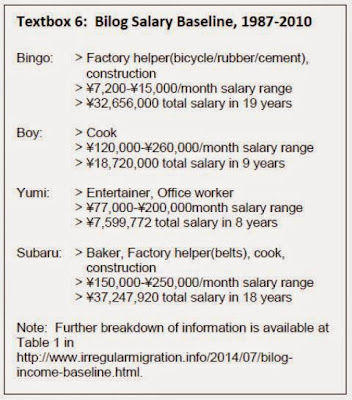 All these jobs were secured thru direct referrals from members of their social networks.  Undeniably, contacts would have no jobs to refer if the economy were down.  In this sense, contextual factors indirectly bear down on “bilogness.”  But neither can bilogs access labor markets directly given their lack of documentation.   The default, and in most cases, the only, actionable option would be to tap into networks in the job searching process.  Unlike legal migrants, bilogs cannot make cold applications for job openings without any referral.

One could say then that while contextual factors may influence the general outcome of a job search in that an economic downturn might lessen the overall number of available jobs, the job searching process in “bilogness” nevertheless persists as the vitality of their social networks is independent of the volume of available jobs.  Stated differently, as bilogs reflexively mobilize social networks in their job searching – one result of which may be that no job is found – their activation of their networks already, by itself, cultivates it, regardless of the result of the search.

Thus “Bilogness” – constituted by the state as a zero-sum feature, that is, that its intended benefit to the host country comes at the cost of the effective excision of bilogs from full labor market participation – seems to position its constituting parts in specific ways that, when in full interaction, cause its emergent properties to manifest.

That a ¥1.8million yearly salary baseline was realized suggests that some resulting arrangement or alignment of the constituting parts is in play, subverting, if not, indeed, emerging from, the zero-sum that is “bilogness.”   Social networks, as one among many invested parts in “bilogness,” upon reflexive activation by bilogs, align themselves into a positive role in their income generation.   This will be discussed further below.

Relational emergence may also clarify the constitution of “bilogness” within Coniglio et al’s “skill waste” concept.  With the exception of Yumi who received pre-departure training, Bingo, Boy and Subaru learned their job skills in Japan.  Bingo became quite adept at assembly and production processes of bicycles, rubber and cement; Boy eventually mastered all Japanese dishes offered in the menu; Subaru became a master baker.  Learning skills on-the-job, however, is not enhanced by a migrant’s lack of legal status.

“Bilogness” uniquely qualifies skill waste in that employment status (and thus security and income) remains static despite skills acquisition over long tenures.  We may say that this qualification is relationally significant because the process of worker training is designed a little differently in other work situations.  Yamanaka (1973, p.75) explains that the Japanese make a distinction between “unskilled labor” (hijukuren rodo) and “skilled-labor-to-be” (mijukuren rodo).  The former are those employed as temporary workers in smaller companies doing manual, repetitive tasks with no expected vertical path in skill and status.  The latter are those newly-employed for the long haul by larger companies and, as such, they undergo a skills acquisition program.

Bilogs, with their specific characteristics (recall discussion on comparative theme), now enter into this pre-arranged distinction and – regardless even if it is applied to both local and foreign workers with legal status – further compound the resulting interplay.  Bingo, Boy and Subaru began as hijukuren rodo(unskilled labor) – as they learned their craft in the early years – but their “bilogness” predisposed them to be utilized as senmon rodo (skilled labor) – becoming a skilled production worker, master cook and master baker—but with the pay and status of the tanjun sagyo (unskilled labor).

Ultimately, we say that this relationally predisposed “bilogness” in income generation becomes emergent because the reflexive choices made by bilogs to remedy this situation presents new, ensuing realities.

Posted by eljoma at 2:48 AM No comments: