This section establishes an income baseline of the four bilog cases.  Income is the sum of salary and other income from part-time jobs and other income-generating activities.   Full detail on empirical and secondary data cited below are contained in Table 1 and Table 2 below: 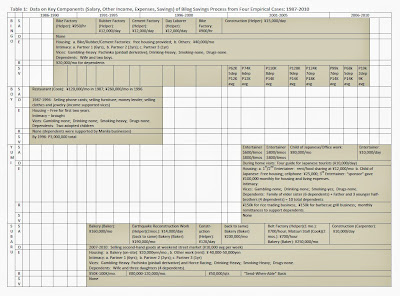 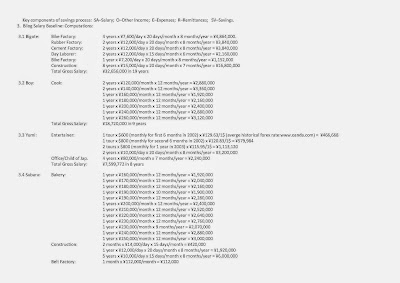 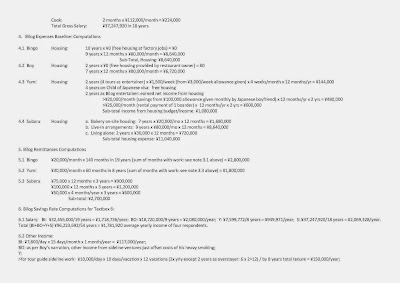 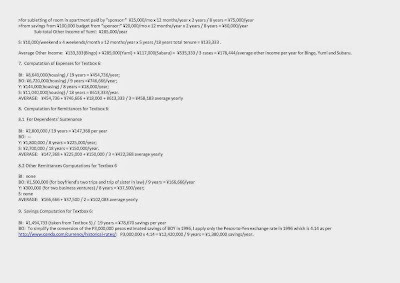 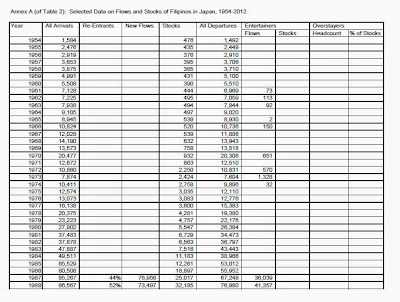 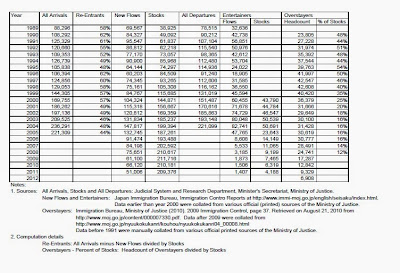 Bingo, Boy, Yumi and Subaru (respondent aliases) entered Japan at their prime, riding on the fast burgeoning, early “gold rush” of sorts of Filipinos into Japan.  With arrivals more than quadrupling in volume (Table 2:A4) and current stocks growing more than six-fold (Table 2:C4) from the previous decade, Bingo, aged 31, and Boy, aged 33, easily slipped thru Japan Immigration in the second half of the 1980s with bogus documents and ulterior motives .   By the 1990s when Subaru, aged 25, bolted his 3-day shore pass and sought refuge with relatives, there was roughly one overstayer for every two resident Filipinos in Japan (Table 2:G5).  Yumi, aged 17 (on documents, aged 20), was among the many Filipinas in the early 2000s – the highest ever volume, three of every five new arrivals(Table 2:F6) – entering Japan as Entertainers.

Both Bingo and Subaru missed out the entirety of their children’s growing years, returning to Manila after nearly two decades of overstaying (19- and 18-years respectively) but for completely opposite reasons.  Bingo had saved up a modest fortune of .7million pesos over an 8-year span – voluntarily surrendered in 2008 – and looked forward to reconstituting his family life now armed with his own capital to start a business.  Subaru had already, for years, been out of touch with his wife and three daughters when he was apprehended in the street, returning to Manila in 2010 with no savings.

Boy and Yumi overstayed  for just short of a decade (9- and 8-years respectively) though their reasons for coming to Japan could not be farther apart.  Boy owned and operated a beauty parlor and its earnings were enough to support himself and his two adopted children, but he wanted more.  He surrendered in 1996 and returned to Manila with approximately 3 million pesos in savings.  Yumi was the sole bread-winner to nine dependents, but was, herself, unmarried.  She was arrested in 2010, returning to Manila with no savings.

Is there a common bilog savings process?