The exigencies of migrant illegality impel its participants to a heightened urgency and shortened cycle of interrogation of risk versus benefit.  Overstayers routinely grapple with both strategic choices - albeit unknowingly given the absence of perspective and uninformed by hindsight - and tactical dilemmas: the impact of short-term productivity enabled by their state-unsanctioned, extended stay on their own well-being and that of their families (recall d1/2 and e1/2 of Figure 11); deciding who to trust with the knowledge of their (lack of) legal status especially when this assists or endangers the recommendation with which his current or next job is secured. 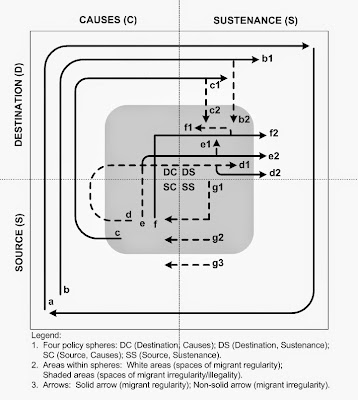 Local authorities (Shipper 2008) also find themselves weighing their more immediate mandate to enhance the welfare of their constituents versus their role in towing the national policy line.  Outcomes of value negotiation include regret over long-term misprioritization (recall Subaru/Textbox 5), the primacy of economic over all other considerations (recall Manong/Textbox 4) or humanitarian considerations on health services (recall Iking/Textbox 2).

It is this value negotiation that the APCCRS's suppressant strategies target to rein in by ensuring that the result of the negotiation tilts in favor of the State.  One example is the 2004 Departure Order System (Japan Immigration Bureau 2004) which presented overstayers with the option to voluntarily surrender and return to their country of origin in exchange for a shortened period of banned return to Japan and the waiving of what was previously mandatory detention for all overstayers.  Another instance is the 2012 abolition of the Alien Registration Law and its replacement with the new Resident Management System which centralized the registration and management of foreigner identities with national-level agencies, having the effect of minimizing or altogether negating the pattern of favorable, at worst, or, at best, neutral treatment of overstayers at selected local governments throughout Japan.

The property of value negotiation in component parts may be best exemplified in the suppressant strategies related to productivity (see #4 strategy in Table 17).  Foreigners with Japanese descent are singled out to be given job placement and career counseling assistance in order to head off their regression into crime.  This form of value negotiation has been described as a racialized hierarchy (Shipper 2008) on which access to employment markets is wielded most favorably in favor of foreigners with Japanese descent.

GO TO:  Emergent Property:  Interdependence
Posted by eljoma at 11:14 PM