[note to the reader: names of people and places have been changed to protect the privacy of my respondents and confidentiality of their answers to my questions.]

there's something eerie about walking in the streets of japan early in the morning. it's like everybody's still asleep, tired from a very late night of work, and so the streets are empty. department stores open at 10am or 11am so people start showing up when the stores open up.
or it depends on the part of the town that one is in. i am in kami nopporo, at sapporo city, and i am here to meet up with one of my local friends who will introduce me to a person who may be able to link me up with day workers among whom i hope to meet and talk with filipino irregular migrant workers. i took the overnight ferry, and it arrived early in the morning. i'm set to meet up with my friend at 6pm but i decided to come straight here to kami nopporo so i could walk around and scout the place out.
i'm now sitting at a bus stop because these are the only benches i could find that had a shade. i passed by two small parks while walking around, and there were benches there too, but i decided not to sit there as my laptop would be totally exposed if in case it'd rain. this bus stop is beside a department store called seria that has a pet plaza on the first floor, books and liquor on the second.
a van selling bread just parked across the street. it's playing loud music to attract passers by, and it's working. the sign on the van's side says: traveling bakery. 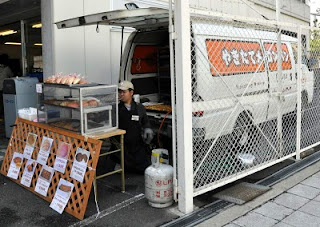 boy the wind is strong, and it's blowing to the ground the bicycles beside this stop.
more people on the streets now. it's 10:20am. am getting up to walk around. and to find a mcdonald's store where i can plug and recharge my laptop.
later.

1:24 PM 4/29/2010
walked for an hour and a half around a circumference of about 1.5km from the kami nopporo station but couldn't find a mcdonalds. i was able to find an outlet though at the 5th (and last, parking) floor of the nitori department store. paused for a few seconds thinking if i could just sit on the floor and blog from there but realized that that outlet may not have been put there for use by the public as there were no seats and the outlet was safely tucked into one far corner of the floor. decided that i didn't want to get myself into any trouble and left.

while walking i stumbled upon what was like a mile-long street market. there were lots of people. i suddenly realized why there were no people in the streets this morning. it is a holiday today of some kind. everyone's out shopping or out at the entertainment areas.
while window shopping i decided to buy a plate of fried tofu for 120yen, thinking how good that protein must be for my health. as expected the taste was bland, and i had to summon deep reserves of will power to finish the four very large sizes of great-for-the-health-but-very-hard-to-swallow tofu. alas, my will power failed miserably. i passed by another store selling various kinds of innards (wasn't sure if it was chicken or pork or beef) grilled with soy sauce, and i thought it would be a perfect match with the bland tofu. so my will relented to the cravings of my tongue, too bad. but not for my happy taste buds.

i devoured my tofu-innards combo while walking back to the kami nopporo station, and decided it would be better to just train over to shin sapporo which is like a big shopping area where i was sure i'd find a mcdonalds.
so am now sitting in this mcdonalds branch at the shin sapporo station - and i now realize that it's the same branch and the same table where my eldest son and i sat last january when i brought him here.

lots of kids with their parents. good holiday this is.

5:26 PM 4/29/2010
am back at kami napporo station, waiting for my friend to arrive. i saw some power outlets inside the train station itself, so i plugged in and here i am blogging from kami napporo station. interesting. i could pay 120yen (the cheapest ticket) just to get in so i can use the outlet. but there are no chairs. am sitting on the tiled floor and it's making my butt cold. am on an indian seat position with my laptop flat on the floor, making my arms fully stretched downward to reach the keyboard. 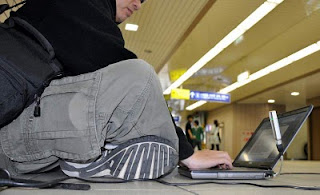 not an ideal position for typing. and i don't know yet if this is allowed. so far no station personnel has driven me away.

9:29 AM 4/30/2010
washed, rested, full. each of us has a routine, a protocol, a basic minimum without which one cannot function. or can we, and how does one know one's minimum? those were the physical needs. what about the psychological needs? dignity and self-respect. pride. peace. happiness. what baffles me is not that we all satisfy our many needs in varying degrees but, rather, who gets to decide or what societal forces dictate which ones of us meets our needs and which ones don't.

last night i checked myself into one of the many cheap worker hotels, known locally as a doya, wanting to experience first hand what the conditions were. like most of the day laborers here in kiyota-ku, irregular migrant workers, having no stable job and no permanent residence, are said to frequent these doyas. together with my local friend, i hopped across a number of doyas looking at the facilities and talking with the receptionists. i soon realized that i should have checked myself in earlier because all the really cheap rooms were already gone. i got the next cheapest class of rooms for ¥1,500 a night (see pic below). 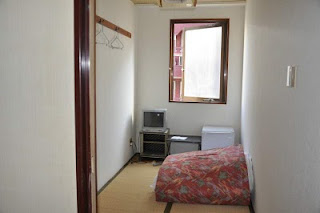 single and private, two-tatami in size, with a small refrigerator and tv but no aircon, with clean sheets, hot water in the clean common toilets, and an ofuro: i actually found the facilities more than my minimum. that's one advantage coming from poor, third-world countries like the philippines: we are trained well at survival as our minimums are at rock-bottom level. tonight i will try the ¥700 common dormitory type lodgings. [more detailed story on my doya experience is here.]

but then again, the question is what is one's minimum? even those who stay at the cheapest accomodations at ¥700 a night are still much better off than those who don't have ¥700 for a bed, thus having to sleep in the street or at the parks.
i am now at a small eatery by the side of the street. i chose this one as i asked the owner if he'd allow me to plug my laptop and i'd pay him additional money. our trip yesterday to meet the filipina owner of a local store/eatery/grocery of filipino foods didn't bear fruit. we walked about 15 minutes from the kami napporo station to her store, but we were surprised to find that it was closed. probably some sudden change of plans, undoubtedly facilitated by the holiday yesterday, caused her to close shop. so we went instead to shin sapporo, tried two filipino snack bars, and they were also closed. when it rains, it pours; when your luck strikes out, you strike out not just once but three times. today is not a holiday anymore, so i'll be going back to that filipino-owned store by myself by 1pm when it opens.

am now heading back to beppu. hectic would be such an understatement to describe the whirlwind of activities i had in these last 3 days.
through iking, a very knowledgeable key informant with an established personal and professional network of contacts among the filipino community in this city, i was able to find:
1. four (4) irregular filipino migrants;
2. seven (7) previously irregular filipino migrants; and,
3. nine (9) deported irregular filipino migrants.
in addition to that I was able to meet up and touch base with five (5) key informants who are very much involved with helping filipino migrant workers in the city.
it was a very fruitfrul, 5-day trip. this trip was really about trying to operationalize a pre-identified own-search strategy (OS strategy) aimed at ensuring that respondents found would be able to talk freely and comprehensively on all aspects of their lives as irregulars. the os-strategy was developed to offset a number of perceived challenges and limitations to the integrity of data from respondents who i found through the introduced-by-organizations strategy, meaning thru the direct referrals of organizations working among the filipino migrant community.
Posted by eljoma at 5:38 PM No comments: