Given the nature and sensitivity of the study, the single, biggest hurdle is identifying, finding, establishing contact and building the trust and confidence of irregular migrants. In order to provide in-depth and accurate answers to my research questions, it is necessary to ensure that the study’s subjects are representative of 3 focus areas, as shown in Figure 1 below.
Figure 1: Three Focus Areas of the Study of Irregular Migrants 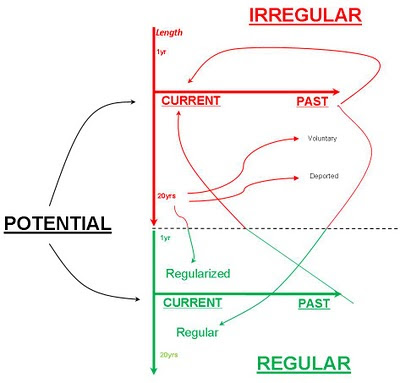 a. Three Focus Areas
Becoming an irregular migrant entails significant effort in terms of weighing all options, planning and execution, highlighting thus the need to investigate the “potential” irregular migrant (Focus Area #1) and the conditions that facilitate or hinder this process.
Focus Area #2 (Irregular) and Focus Area #3 (Regular) can be described as a chicken-and-egg situation, as shown by the red and green arrows in Figure 1.
A migrant can enter a host country legally, but stay beyond the period indicated in the visa, thus transitioning to an irregular migrant. Or, a migrant can enter a host country as an irregular migrant, and through some alternative process become regularized. An irregular migrant may opt to be voluntarily deported, then re-enter the country as a regular migrant by marrying a local. A spouse of a local may lose regular status through a divorce and subsequent cancellation of a spouse visa, then may choose to re-enter the host country as an irregular.
This fluidity and volatility of the situation of irregular migrants stresses the importance of two variables – length of stay(number of years), and status (current irregular/regular or past irregular/regular) – that interplay within and between the 3 key focus areas, creating various conditions that prove supportive or detrimental to the survival, or thriving, of the irregular migrant. These two variables provide the basis of within-case analysis that will be done on each case.
b. Cross-Case Comparisons Using “Innovative Local Governments”
A number of Japanese local governments have developed various alternative processes that effectively make available various social services to irregular migrants, effectively breaking away from towing the official stance of the national government that explicitly restricts social services to only those with legal status (Shipper, 2008). Shipper lists these innovative local governments as follows: Osaka, Utsonomiya, Kawasaki, Yokohama, Kanagawa and Saitama.
This study will further analyze the results of its case studies from the three focus areas by applying the layer of “innovative local government” – effectively conducting cross-case comparisons that will highlight various contextual factors and their individual or combined effects on the survival of irregular migrants. Understanding which common survival tools, if any, irregular migrants, located in different “innovative local governments”, have developed will strengthen the study’s conceptual validity (George & Bennett, 2005).
An analysis matrix in the format shown below will be generated by such a cross-case comparison.

C. How Do I Find the Irregular Migrants and Establish Contact?
In field work conducted in August 2009, I was able to interview a handful of Filipino irregular migrants who were introduced to me by a local non-profit organization helping overseas Filipino workers. While finding subjects is undoubtedly faster through referrals by organizations, the effectiveness and depth of findings of the researcher may be defined and thus delimited by his default association or identification with the organization that introduced the irregular migrant. To be sure, interviewees introduced by an organization may conform to any given set philosophies or results that are being currently promoted. Answers to questions may be guarded, filtering out information that may jeopardize the continued assistance being received by the interviewee from the organization.
Thus, it is necessary to develop an alternative method of finding subjects, not only to ensure objective data, but as a way of triangulating and corroborating information given by both sources.
Two basic search strategies will be employed: Own Search (OS) and Introduced by Others (IO).
The choice of search strategy to use will most likely define the “length of stay” variable, that is, an OS strategy will most likely net irregular migrants who are neophytes (less than 1 year in the host country) and an IO strategy will most likely produce mid-term overstayers (2-10years length of stay). To be sure, the length of stay variable is significant because the depth of survival experiences and, in fact, the level of improvisation and innovation of survival habits and tools, varies directly with the number of years the irregular migrant has been in-hiding – whether in hand-to-mouth surviving mode, or in thriving mode.
Figure 2 below attempts to show in graph form the relationship between the two types of search strategies, the length of stay variable, the status variable, and Focus Area #2 and #3.
Figure 2: Relationship between Search Strategies, Length of Stay Variable and Status Variable 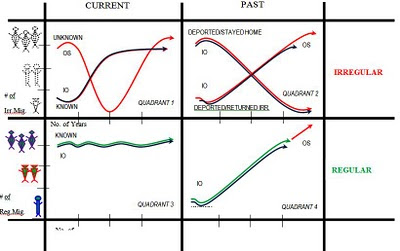