Now having qualified how migration statistics are derived, we can now be more critical in digesting the numbers that follow below.
As of 2005, the stock of migrants worldwide stood at 190 million. Since that estimate was based on the latest available country censuses which was at year 2005, migration organizations that needed to estimate yearly migration volumes resorted to extrapolation and interpolation method. Thus International Organization for Migration (IOM), at the end of 2008, placed the number of international migrants at approximately 200 million, making up roughly 3% of the world’s population.
The most compelling trends of migration in the 21st century, culled by IOM from various data sources , include, among others:
• In 2005, one of every two migrants (49.6%) is female, or 94.5million women migrants. The situation has not changed dramatically since the 1960s when 46.8% of world migrants were female.
• In 2008, monies sent by migrants to their dependents back in their home countries – called remittances – was estimated at US$375 billion (an increase of 6% from the previous year). Eight of every ten remittance dollars (US$305 billion, or 81.3% of US$375 billion) went to developing countries, even surpassing the amount of official development aid.
• Roughly 1 of every 10 migrants worldwide (20 to 30 million or 10 to 15 per cent of the world migrants stock) is an irregular migrant.
Posted by eljoma at 10:51 PM No comments:

Available Data on Migration – Some Gaps

A quick note is in order regarding available data on migration. Two major international migration organizations state in no unclear terms that:
[IOM]“Migration is considered one of the defining global issues of the early twenty-first century, as more and more people are on the move today than at any other point in human history,” and that;
[ILO]"Migrant workers are an asset to every country where they bring their labour. Let us give them the dignity they deserve as human beings and the respect they deserve as workers.”
Yet it is surprising that statistics and trends that measure this all-important, 21st century phenomenon are mostly based on interpolated and extrapolated figures that were not originally intended to measure migration.
The four major organizations at the forefront of the migration discourse are as follows:
1. The International Migration Programme, Social Protection Sector, International Labour Organization (ILO)
2. International Organization for Migration: The Migration Agency (IOM)
3. Organization for Economic Co-Operation and Development (OECD) – Migration
4. Migration and Remittances, The World Bank
These four organizations have built databases on various aspects of international migration, churning out annual reports and papers that cite migration statistics and trends, as follows:
1. By the International Labour Organization – International Migration Programme
1.1 International Labour Migration (ILM) Statistics
1.2 International Migration Papers
2. By the International Organization for Migration
2.1 World Migration 2008
3. By OECD-Migration
3.1 International Migration Outlook, 2009
3.2 OECD International Migration Database
4. By the World Bank
4.1 Migration and Development Brief
4.2 Remittance Prices Worldwide
A review of their data sources shows that ultimately migration estimates are based on two variables used in national censuses, namely: place of birth and nationality. Answers to “place of birth” enable the identification of a foreign-born population, and this forms the basis of the numbers of migrant stocks in a given country. When place of birth information is unavailable, the variable “nationality” is used in its place, that is, citizens registered with foreign nationalities being counted as part of the migrant stock of a given country.
Since it is clear that migration is about movement of people and movement is quite dynamic, taking place in cycles and repetitions, the current estimates of migration numbers leaves much to be improved since the important cycles and repetitions are not captured by the single snapshots in time that country censuses measure. Moreover, the period between censuses is, at best, every five years or more depending on a country’s financial resources. Thus movements of migrants between censuses are not captured, thus possibly missing out on the effect of current social and political events that take place within receiving and sending countries on the behavior and actions of migrants.
Also, data for departures and arrivals are not thoroughly collected, analyzed and cross-referenced with census data in order to come out with more dynamic models showing migrant movements.
Posted by eljoma at 10:36 PM No comments:

These two terms are used almost interchangeably – due in no small part because of the common belief that one decides to leave one’s country and become a migrant primarily to work. To be sure, for the Merriam-Webster online dictionary, a migrant is “a person who moves regularly in order to find work.” Nevertheless, it is important that we define these two terms separately so that we may clearly define the subject of study of this paper.
Ms. Gabriela Rodríguez Pizarro of Costa Rica, who served as the first Special Rapporteur on the Human Rights of Migrants from 1999-2005, proposed three conditions under which one should be considered a migrant, as follows:
(a) Persons who are outside the territory of the
State of which they are nationals or citizens, are not
subject to its legal protection and are in the territory of
another State;

(b) Persons who do not enjoy the general legal
recognition of rights which is inherent in the granting
by the host State of the status of refugee, naturalized
person or of similar status; and,

(c) Persons who do not enjoy either general
legal protection of their fundamental rights by virtue of
diplomatic agreements, visas or other agreements.

The legal aspects of Pizarro’s proposal may be overly explicit, but this is not without good reason. Her proposed definition attempts to veer away from the “birth place” aspect of being a migrant, that is, that one is a migrant if one lives in a country other than one’s country of birth.
The Jus Sanguinis principle – that birth in a country does not give one automatic citizenship, but rather being born into a family who are existing citizens – made it possible for children of migrants to be considered still migrants even if they were born in their current host country of residence.
Notwithstanding the complications of the dual citizenship model, for the purposes of this study, the definition of a migrant shall follow Pizarro’s first of 3 proposed conditions, that is, that one is a migrant if one is residing in a country other than that to which he is a citizen or national of.

A migrant worker is defined as “a person who is to be engaged, is engaged or has been engaged in a remunerated activity in a State of which he or she is not a national.”

It is clear from the definition that the migrant worker participates in the remunerated activity with his full knowledge and consent, differentiating him from those forced or coerced into leaving their home countries, such as refugees, asylum-seekers or victims of human trafficking, mostly women and children, for sexual exploitation or forced labor. The United Nations Educational, Scientific and Cultural Organization (UNESCO) cites motive and legal status as the bases from which countries construct their classifications of international migrants.
The classification above highlights the fact that categorizing such a complex dynamic as migration is tricky. Migrants could be shifting between regular and irregular legal status depending on opportunities that become concrete actionable options. For example, a guest worker whose contract expires may decide to go underground and find other work, thus making him an irregular migrant from his previous regular migrant status. And should there be a distinction made between once-regular irregular migrant workers and immediately-irregular migrant workers (who enter on thru faked documents, or thru jumping ships, or thru transit visa violations)?
Posted by eljoma at 10:24 PM No comments:

Diagram 1 below is a visual representation of how international migration starts and is continued. First, an explanation of the shapes, colors, lines and their respective placement is necessary.

Diagram 1: The Starting and Continuation of International Migration 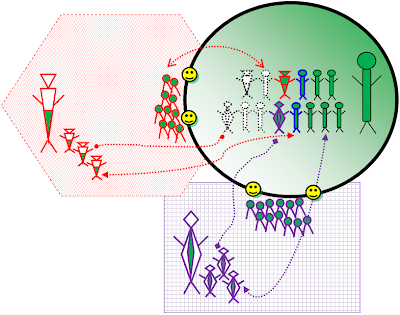 , represent three countries whose people, businesses and governments are inevitably interconnected in various ways – thus the overlap in the placement of the shapes – as a natural result of economic and cultural globalization.
The government,

has successful nurtured its economy and jobs are aplenty for its citizens,

, as well as for foreign workers,

, represented by different shapes and different outline colors. As all workers are gainfully employed, income earning potential is maximized, as represented by the full-bodied green color.
The citizens of country

are not as lucky. Jobs are few and those who are employed earn only a fraction of the salaries of workers in country

, as represented by their half-bodied green color.
Those without jobs,

, are straddling the borders of country

trying their best to get in, their single motivation being to get work and earn money for their dependents – thus the green color of their heads. Helping them to get into country

are private organizations, recruitment businesses and government agencies – represented by the smiling faces,

, sitting on the border lines. Notice though that the borders of country

are thicker and more solid than the other two countries showing that border control is tight. The borders of country

are dotted lines and those of country

are thin lines, meaning they gladly welcome tourists and visitors for local vacations and businesses to boost local investments.
Migrants who are currently in destination country

have existing interpersonal ties with friends, relatives and other acquaintances in their home countries, as represented by the lines connecting the citizens of the three countries.
Lastly, together with the local workers,

, and the foreign workers,

, there is another group of workers who, in fact, work just as hard, if not harder, but whose legal status, make them virtually non-existent, thus their dotted outlines,

. They are the irregular migrant workers, and notice that even though they are employed and earning money their bodies are not in green color. This is because their legal status moves them beyond the reach of official statistics and thus even though they are productive members of society, they are essentially unrecognized as such.
Posted by eljoma at 7:54 AM No comments: