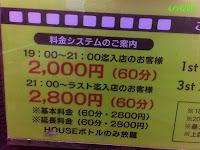 Worrying that we would go over our agreed one hour limit, I was stealing glances at my companion who was engrossed in animated chatter with his assigned hostess. The sign outside the club said 2,000yen per hour from 7pm-9pm and 2,800yen per hour from 9pm-onwards. that's per person, so for the two of us, our bill would be an easy 5,600yen. my companion didn't seem to be worried, so i turned my attention back to my own assigned hostess, who, like me, also seemed not to be fully in the moment.

This was our first night out on official business, gathering data for our dissertation research. My companion, who is also my flat-mate, is also into migration research but while my focus is on irregular migrants, his is on how regular migrants have been able to adapt and eventually prosper within the legal bounds of Japan's immigration laws.